Providing quality Philippine handicrafts since 1945 and hailed as the authentic brand for the best in native products, Tesoro’s takes on 2015 beginning with the celebration of the birth centenary of its late co-founder, the much admired Salud Tesoro on Friday, February 6. 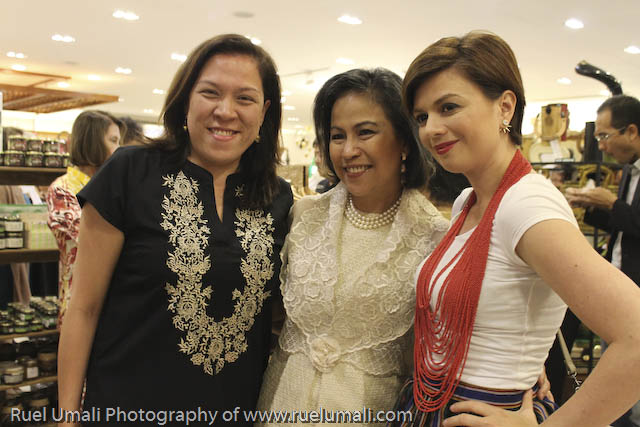 Her birth centennial kicks off a year-long program that will culminate with the celebration of Tesoro’s 70th year in business come October. The activities will highlight how Tesoro’s continues to reflect the timeless virtues of Salud S. Tesoro to combine industry with passion, honesty with integrity, leadership with innovation – all presented with the exemplary service that earned her the sobriquet, “The Mother of Philippine Handicrafts.” 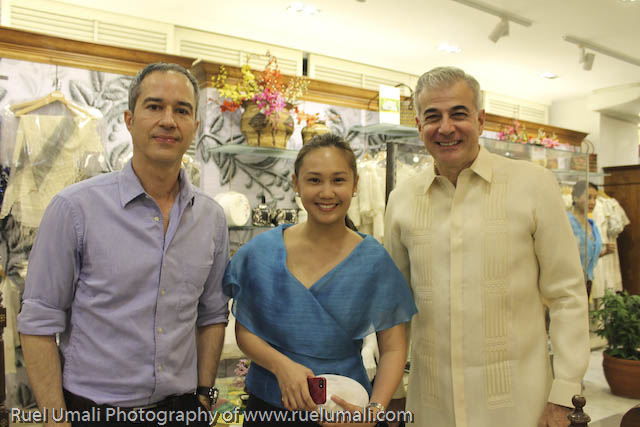 “Tesoro’s ceaselessly develops new designs and concepts while maintaining our core collection of heritage crafts, giving us an identity distinct from typical handicraft stores.” says Maria Isabel “Beng” Tesoro, youngest daughter of the prolific founder and Group CEO of Tesoro’s. “We remain connected with our loyal customers while we reach out to new ones.We support hundreds of employees and thousands of key suppliers so we can provide world-class Filipino products along with our attentive staff for a pleasurable shopping experience.” added Beng who, with eldest sister Alice Tesoro-Guerrero, Chairman of Tesoro’s, and their nine surviving siblings have steadfastly backed the business founded by their parents. It is a strong enterprise because it blends the best qualities of a professionally-run corporation with the patience and long-term view of a family business.
A woman of guts, genius, and determination 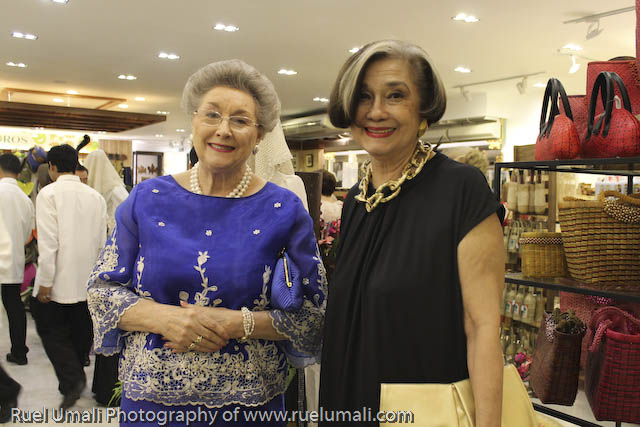 Tesoro’s emerged in 1945 from the ashes of the liberation that ended World War II. In the fluid reconstruction environment, Sally convinced her husband, Nestor Tesoro to leave his job as a Bureau of Immigration lawyer and join her “Sally’s Gift Shop” in the erstwhile central commercial street of Escolta in Manila. They renamed the business “TESORO’S,” which appropriately means “Treasure” in Spanish. It was then that Sally dreamed up the “All-under-one-roof” idea, gathering in her store all the quality local crafts for which she had scoured the country. In time, the couple’s reliability, honesty, and fair dealings won themmany regular clients, and the store became a mandatory stop for tourists and visiting VIPs in the ensuing decades. Their reputation for personalized service and consistent quality made TESORO’s the destination for gift-shopping for Philippine craft and apparel, especially Barongs. 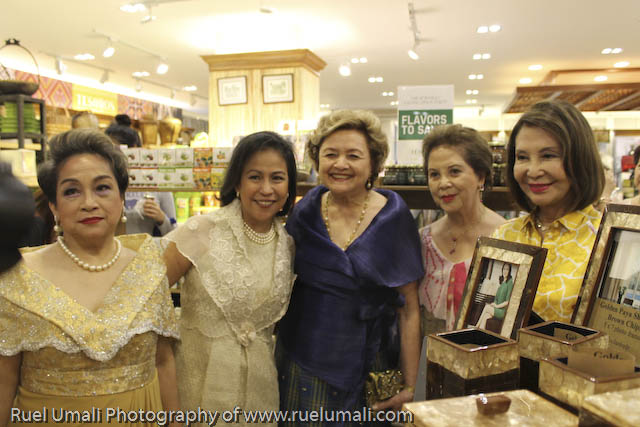 Salud S. Tesoro received many awards in recognition of her leadership. Among these were
the Presidential Award of Merit conferred by President Marcos, the Management Association of the Philippines Award for Excellence, the Agora Award, and the Gear Award, among many others. 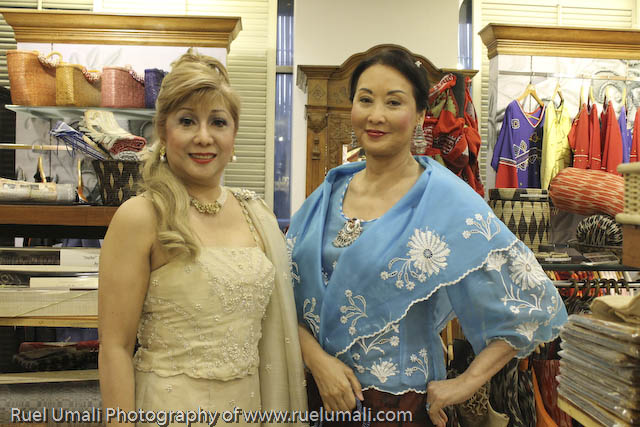 In 1973, Mr. Tesoro passed away, spelling the end of an unusually harmonious and compatible husband-and-wife business partnership. But Sally, or Doña Salud as society came to call her, soldiered on. She grew the business even more, expanding into exports and investing in real estate. All throughout, she supported her ten children and growing family of staff and suppliers. Through her indefatigable work ethic, she communicated the belief to all whose lives she touched that with perseverance and determination, one can succeed. 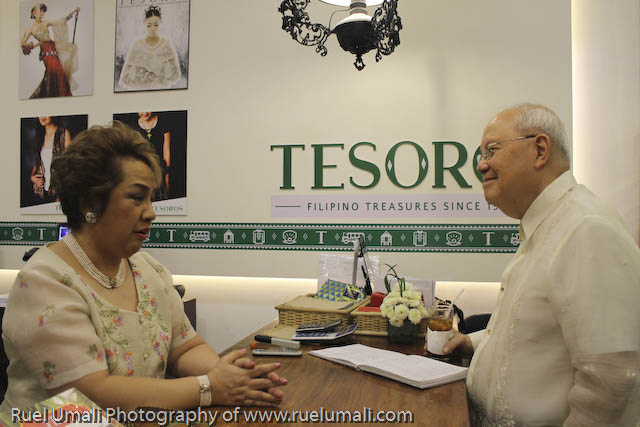 From its humble beginnings in Escolta, Tesoro’s today is a multi-million enterprise involved in multiple activities from retail merchandising of Philippine handicrafts to building and property management, an upshot of its successful diversification. 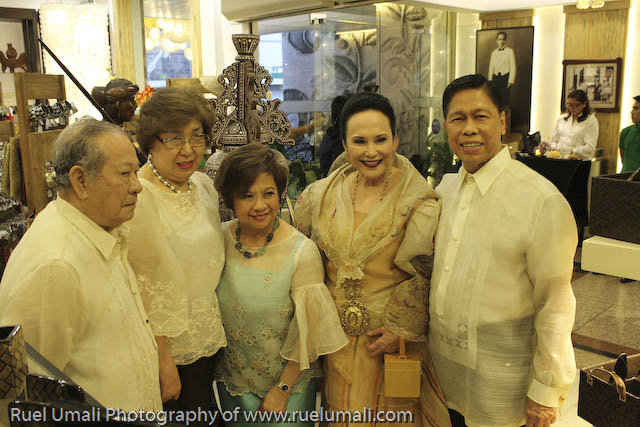 It has been a long road from Sally’s Bulacan beginnings in 1915. Technically orphaned at age six, Sally was prevailed upon to manage her uncle’s hat shop in Intramuros because of financial constraints due to the Great Depression of 1929. She had to give up her dream to be a high school principal and work at the age of 14. Her transformation from that responsible teenager into an indomitable businesswoman will be published in a book on her life by the family and launched very soon. 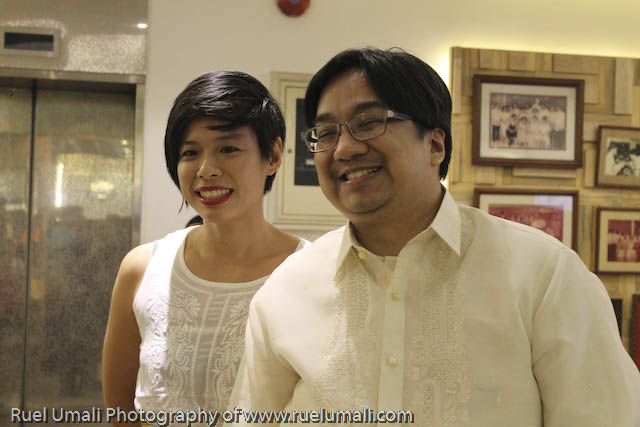 The book, edited by Mary Grace Tirona, will feature photographs and unforgettable anecdotes, tracing the beginnings of Salud Tesoro and her story of guts, genius, and determination that led to her success.
Preserving culture, inspiring creativity at 70

In time for Salud’s birth centennial, the family renovated the TESORO flagship store on Arnaiz Avenue, Makati, which was built in 1995. 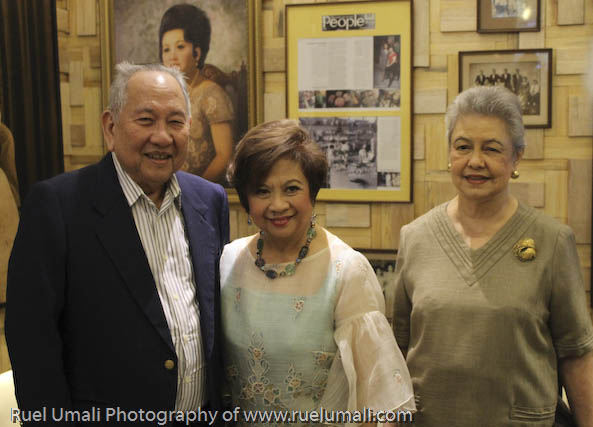 Commissioned to redesign the building façade were Mark Wilson and Nikki Escalona-Tayag of WE Design. They conceived the innovative building “skin” illustrating Tesoro’s instantly recognizable hand-embroidery, a first-of-its-kind in the country. The welcome canopy is fancifully lit by a multitude of iconic capiz-shell balls. The store interiors were done by Jose Lirio, creative consultant of the company. On display in the lobby are priceless cash registers from the original Tesoro branches. The product lines are accompanied by educational and entertaining descriptions. The whole store is pervaded by classic and contemporary Filipino music and a soothing scent. The newly opened “Tommy’s Café” serves expert brews, drinks and snacks. Parking is easy and plentiful. This reinvigorated Tesoro’s provides a complete and pleasant shopping experience. 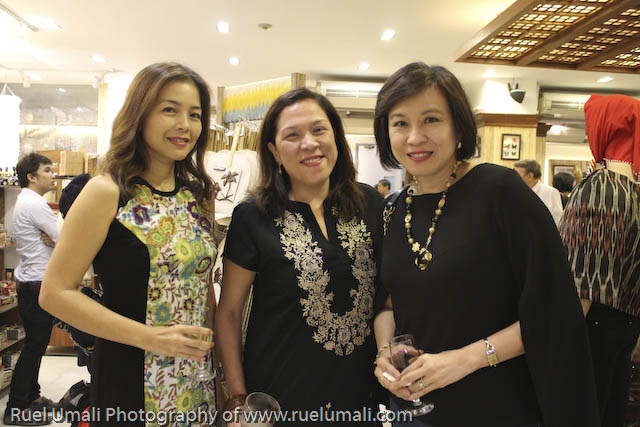 Key events leading to the October 70th anniversary milestone include the showcase of new and innovative ideas from young talents Tesoro’s has chosen to support. “This continues the legacy of my mother who supported our local craftsmen and designers from the very beginning,” adds Beng. Today, Tesoro’s works with the 2nd, generation progeny of its suppliers maintaining a unique trans-generational commercial relationship founded on mutual trust and benefit. This long-term commitment is further evidence of Tesoro’s fair dealings and care for its fellow-Filipinos. 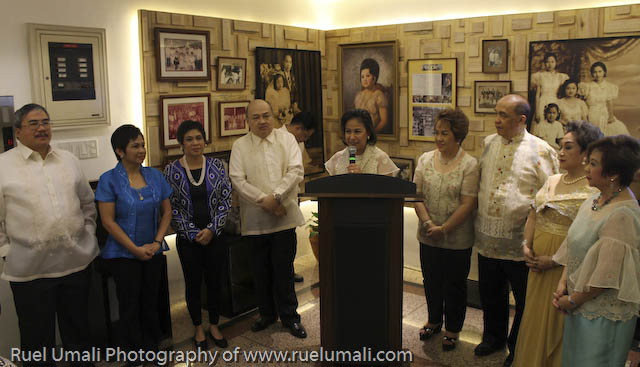 Tesoro’s already offers on-line shopping through its website for customers both here and abroad. Aside from its accessible locations in Manila, Makati, its airport stores provide last-minute shopping convenience for travelers. 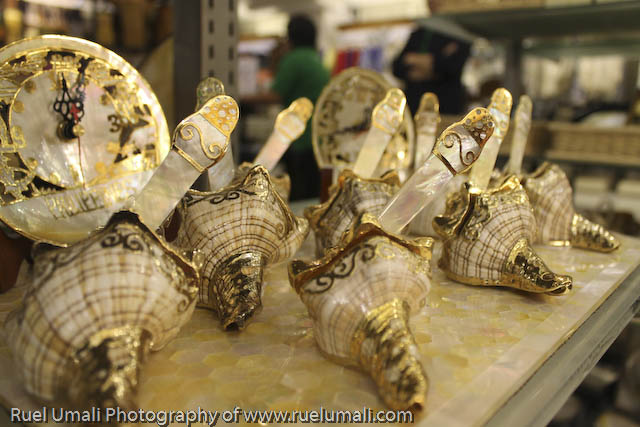 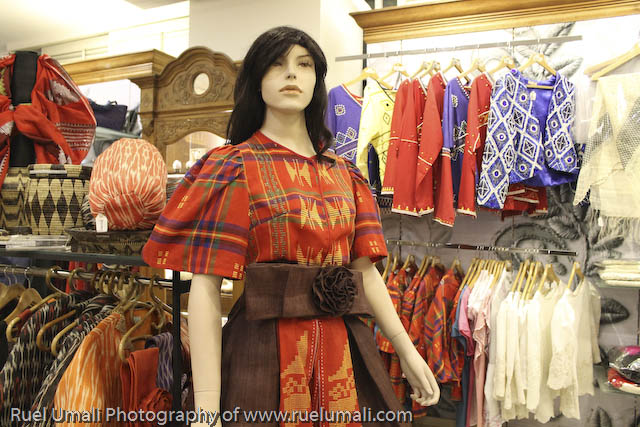 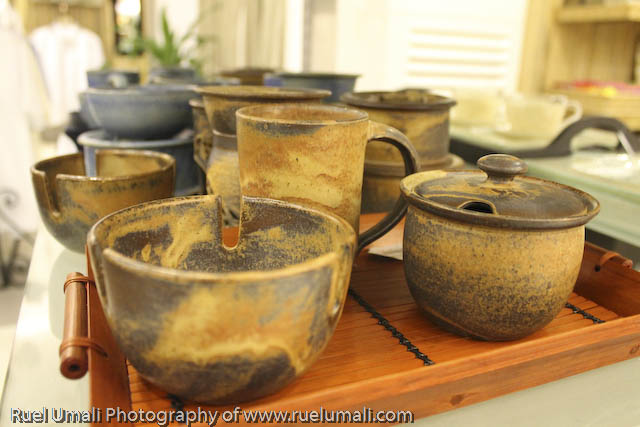 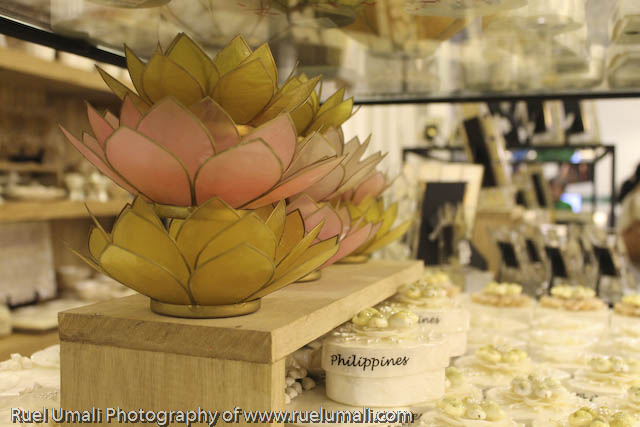 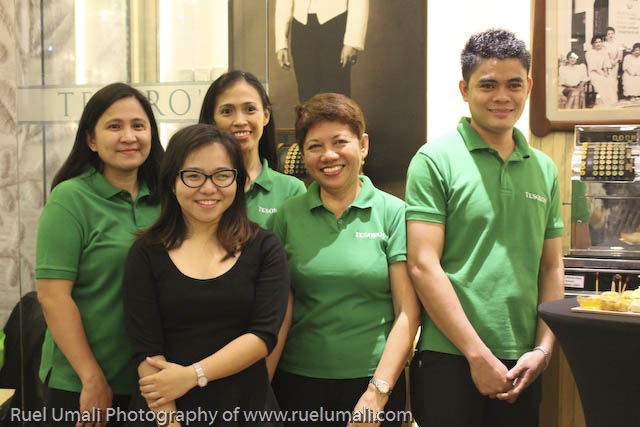 Its commitment tostaying local, supporting Filipino artisans as it sought and achieved steady growth through the years makes the story of Tesoro’s and its founder truly remarkable. 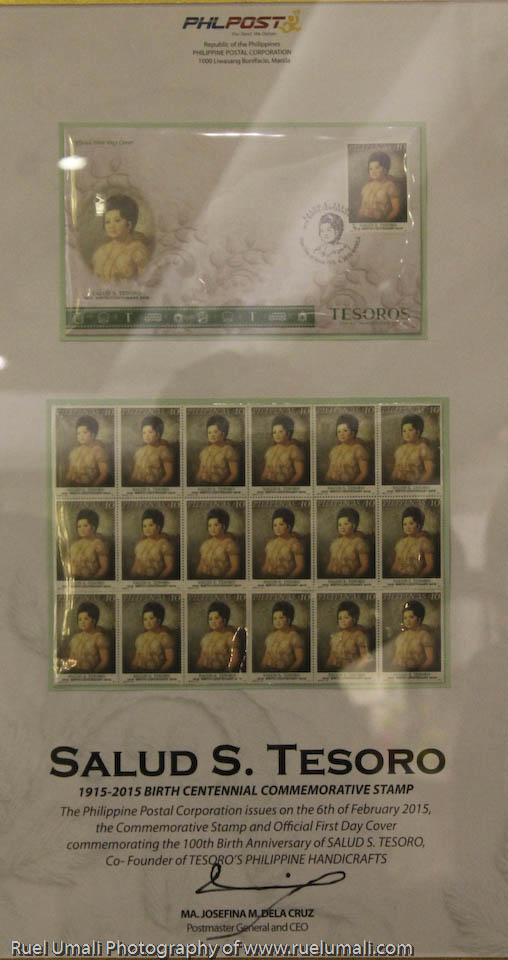 During this 100th birth anniversary celebration of the great Salud, we invite loyal customers and the next generation of Filipino consumers to visit TESORO’S: to patronize the products of our peoples at our stores for this is the home where the wealth of our nation, our cultural heritage is sustained and nourished.”